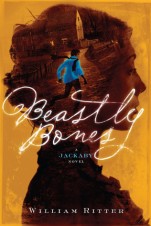 Rating: 5 out of 5 Magical Coffee Cups

In 1892, New Fiddleham, New England, things are never quite what they seem, especially when Abigail Rook and her eccentric employer R. F. Jackaby are called upon to investigate the supernatural.

First, a vicious species of shape-shifters disguise themselves as a litter of kittens, and a day later, their owner is found murdered with a single mysterious puncture wound. Then in nearby Gad’s Valley, now home to the exiled New Fiddleham police detective Charlie Cane, dinosaur bones from a recent dig mysteriously go missing, and an unidentifiable beast starts attacking animals and people, leaving their mangled bodies behind. Charlie calls on Abigail for help, and soon Abigail and Jackaby are on the hunt for a thief, a monster, and a murderer.

I have to start with stating that I truly loved Jackaby. So I might have come into this a little bias. And if you are looking at reviews of the second book I can only hope that you also loved the first.

“Some girls work in shops or sell flowers. Some girls find husbands and play house. I assist a mad detective in investigating unexplained phenomena- like fish that ought to be cats but seem to have forgotten how.”

This is how we start out. Investigating some cats that are becoming fish. Yeah, go ahead and read that again, cats becoming fish. Soon after they are jumping into an investigation involving stolen dinosaur bones from a recent dig. Because this is Jackaby there is a lot more involved and it is glorious. We meet some old friends (Charlie and Jenny) but we also meet some new friends like Hank Hudson, a skilled trapper who happens to have a fondness of the weird and unusual and Nellie Fuller, a spunky journalist who seems to have no fear.

Because this is the second book you should know already that there will be supernatural elements and a whole lot of weird. I have to say that I am loving Jackaby and Abigail (I want to hang out with these two) and hope to see this series continue on with more adventures.