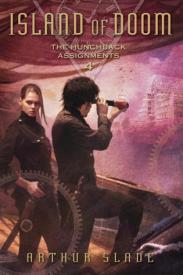 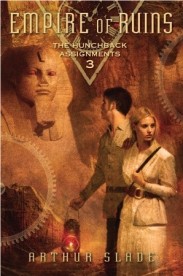 The Hunchback Assignments by Arthur Slade

I found the first book by accident.  I thought the premiss sounded interesting.

The mysterious Mr. Socrates rescues Modo, a child in a traveling freak show. Modo is a hunchback with an amazing ability to transform his appearance, and Mr. Socrates raises him in isolation as an agent for the Permanent Association, a spy agency behind Brittania’s efforts to rule the empire. At 14, Modo is left on the streets of London to fend for himself. When he encounters Octavia Milkweed, another Association agent, the two uncover a plot by the Clockwork Guild.

I thought that I would find Modo’s abilities a little too convenient.  I thought it would just be too perfect for him to always change his appearance and make everything just work.  He can change his body and face to look others but there are limits to his abilities.  He can only hold these transformations for a limited amount of time and his voice doesn’t change either.  He needs to plan ahead for missions so that he doesn’t change back too soon and he needs to study the person he is imitating so he can mimic their mannerisms and voice as best he can.  So if you were thinking the whole shape-shifting thing was a little too out there, give it a chance.

Ok, so Modo’s abilities are pretty cool and you would think that would be the most amazing thing in this series, you would be mistaken.  There are some pretty fantastic creations in this series.  The Clockwork Guild is basically always up to something, they are always involved in the shenanigans directly (creating horrific weapons) or indirectly (going after the same thing as the Permanent Association) and they can be monstrous.  We are talking metal dogs, metal hands, experiments on children, and flying machines!

Modo: We already spoke of Modo’s abilities but he is also a bit of a book nerd.  He has spent so much of his life hiding because of his looks so he finds his escape in books (don’t we all?).  He is very committed to his duty to Mr. Socrates and his country.  He is interesting because he has this amazing ability, he is a spy, he is unusually strong, he is smart, but he is also just a young kid in the end.  He is thought to be around 14 years old in the first book and there are times in the book he seems much wiser beyond his years and other times he is stumbling over words and blushing around Octavia.

“He does this every once in a while,” Octavia said, “has little outbursts of literary fancy. I’ve learned to put up with them.”

Octavia: She is sort of Modo’s feisty partner in crime.  They don’t always work together but in the stories we read about they work mainly as a pair.  She is an orphan also taken in by the Association.  Growing up mostly on the streets she is tough and resourceful.  She’d rather be in pants running around getting into all sorts of adventures but she still enjoys the pretty dresses she is forced to don in order to pass as a lady during missions.

“I’m improper at heart. I was educated on the streets of St. Giles, after all.”

Mr. Socrates: He is the leader of this group.  The series starts with Modo knowing very little about him but still seeing him as a father like figure.  As the reader you really only know what Modo knows so you learn right along with him.  He starts off so secretive and by book three you begin to learn a lot more.  I left this series not really knowing how I feel about Mr. Socrates.  He had some sweet moments and some not so sweet moments. There were times that I thought he really cared for Modo and then others it seemed like that might have been more that he cared for a valuable agent.  I can’t say I liked him but I can’t say I hated hime either.

Tharpa- This is Mr. Socrates right hand man and also Modo’s self defense teacher.  He seems to always be calm and quick to give sound advice to Modo throughout the series.  He’s kind of like a Jiminy Cricket with the ability to sneak up silently and incapacitate the enemy.

There are a few more, mainly members of the Clockwork Guild that I will let you discover on your own because I just think it is more fun that way.

Like all series (I think) a lot is learned about many of the characters.  Background informations is sprinkled out book by book.  In the last book Modo’s life is put in the spotlight.  I didn’t realize how much I wanted to know all of this information until it started to become available and then I couldn’t get enough.

I will say the ending is not what I expected.  I feel like there could be another book but so far it doesn’t look like there will be one.  I already miss these characters and I don’t know how to fill the void.  It’s like they are off having adventures of their own without me.

It’s odd how characters can become part of your life in such sneaky ways.  I never expected to become so attached but here I am staring at the goodreads.com page showing that there are only four books and nothing in the works for a fifth.