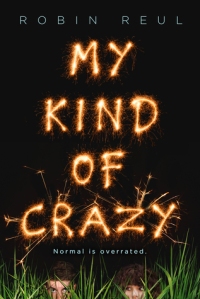 My Kind of Crazy by Robin Reul

Rating: 4 out of 5 magical coffee cups

Despite the best of intentions, seventeen-year old, wisecracking Hank Kirby can’t quite seem to catch a break. It’s not that he means to screw things up all the time, it just happens. A lot. Case in point: his attempt to ask out the girl he likes literally goes up in flames when he spells “Prom” in sparklers on her lawn…and nearly burns down her house.

As if that wasn’t bad enough, Peyton Breedlove, a brooding loner and budding pyromaniac, witnesses the whole thing. Much to Hank’s dismay, Peyton takes an interest in him—and his “work.” The two are thrust into an unusual friendship, but their boundaries are tested when Hank learns that Peyton is hiding some dark secrets, secrets that may change everything he thought he knew about Peyton.

A sad realistic story told from the point of view of Hank, a teenage narrator who can still find humor in tough situations.  Things are clearly not going great in his life and Peyton’s life is not much better, so them together is pretty fun to witness.

“Everybody needs somebody who gets their kind of crazy, right? That doesn’t come along every day.”

The characters felt real to me.  They sometimes did things that didn’t always workout and/or ended up becoming awkward.  This kept me interested and kept me guessing because I couldn’t figure out how everything was going to work out.  New things kept popping up and other characters actions would throw a wrench into others plans, it was just sort of all over the place for a good amount of this book.  Don’t get me wrong, this is a good thing.  It felt like high school.

“Family isn’t about sharing the same blood in your veins; it’s about the people who come into your life and see how completely messed up and nutter you are and then stick around anyway.”

The ending was a little odd and also felt a tiny bit rushed.  I’m not sure if I didn’t like the ending or if I just needed more information.  But at the same time it made sense.  These characters are in high school and who knows where their lives will take them.  I think this book was just a moment in their lives and there was no big moral lesson shoved at the reader besides knowing you are going to meet some crazy people in your life, try to be understanding.

*Random thoughts with this book:

I recently attended the Chicago Comic and Entertainment Expo (C2E2) for the first time to learn about, well, comics.  I really enjoyed seeing how much comics or graphic novels mean to some people.  I loved seeing people dressed as their favorite characters.  I have to say I have loved many novels but never felt the need to dress up as a character from one of them.  Not going to lie, I was sad that I did not have a costume.

In this book Hank tells a story about his favorite comic and his reason for loving it and he also happens to be writing his own comic.  I’m not exactly sure where I am going with this little side story but it was just interesting to read this book after just learning about the power of comic books.

One thought on “My Kind of Crazy”