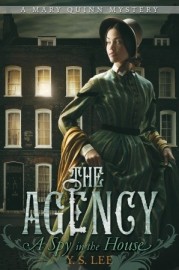 A Spy In The House by Y.S. Lee

Rating: 4 out of 5 Magical Coffee Cups

Rescued from the gallows in 1850s London, young orphan (and thief) Mary Quinn is surprised to be offered a singular education, instruction in fine manners — and an unusual vocation. Miss Scrimshaw’s Academy for Girls is a cover for an all-female investigative unit called The Agency, and at seventeen, Mary is about to put her training to the test. Assuming the guise of a lady’s companion, she must infiltrate a rich merchant’s home in hopes of tracing his missing cargo ships. But the household is full of dangerous deceptions, and there is no one to trust — or is there? Packed with action and suspense, banter and romance, and evoking the gritty backstreets of Victorian London, this breezy mystery debuts a daring young detective who lives by her wits while uncovering secrets — including those of her own past.

We start this book in 1853, Victorian England, with Mary Quinn being sentenced to hang for the crime of housebreaking. She wakes to find herself in Miss Scrimshaw’s Academy for Girls and is given a chance to have a fresh start on life.  At this point we jump ahead 5 years to 1858, Mary is now teaching at the school and also looking for more of a challenge in her life.  She comes to find out that t Miss Scrimshaw’s Academy is not only a place for young women to gain an education but it is also a cover for a top secret corps of female investigators.  The agency feels that women tend to be overlooked and ignored in their domestic roles, like maids.  Ok, just knowing this much should make you want to read this book.  But just in case you are not convinced, I’ll continue.

Mary’s first assignment is to find information on a rich merchant’s cargo ships while pretending to be a lady’s companion to his rude daughter.  Although Mary is told to simply find out what she can through her lady’s companion role she ends up going a little above and beyond.  This catches the attention of a young man named James.  Here we get a bit of romance but nothing to deter you from reading if you dislike romance.  There is a lot of bickering between the two that is sweet and just a little distracting from the plot.  I found myself wondering more about the two of them more than the mystery at times.  So. . . I guess that means I could have done with more romance.

As Mary digs deeper into the case she discovers more about her own background, more specifically her half Chinese heritage.  This is something that she tries to keep secret because of prejudices at the time.  Not much is discovered and what was discovered was left unresolved, so it is safe to say that her heritage will be something that will be touched on further in the next books.

I loved the time period, Victorian England.  I do enjoy my historical fiction so it really not that surprising that I would enjoy the setting.  Lee did a great job of creating the atmosphere with descriptions of different places and the stench of the Thames river.  There was one part of the book where Mary and James are arguing in a carriage and Mary decides to leave:

“Mary flung open the door as the carriage slowed, and he saw that they were indeed beside the river, which shimmered like oily tar in the midday light.  Its odor of rotting waste invaded the carriage, making them gag violently.”

I also enjoyed Mary in general, she is smart, brave, and quick witted.  She is pretty awesome as she disguises herself as a boy, picks locks, and sleuths like a pro.  I look forward to seeing what Mary is going to be able to accomplish as she receives more training from the academy.  I also want to know how she is going to deal with her half Chinese/ half Irish background, and of course I want to see where she and James are heading.  Oh, so much to learn about.