Rating: 3 out of 5 Magical Coffee Cups

Beware the goblin men and the wares they sell.

All her life, nineteen-year-old Liesl has heard tales of the beautiful, mysterious Goblin King. He is the Lord of Mischief, the Ruler Underground, and the muse around which her music is composed. Yet, as Liesl helps shoulder the burden of running her family’s inn, her dreams of composition and childish fancies about the Goblin King must be set aside in favor of more practical concerns.

But when her sister Käthe is taken by the goblins, Liesl journeys to their realm to rescue her sister and return her to the world above. The Goblin King agrees to let Käthe go—for a price. The life of a maiden must be given to the land, in accordance with the old laws. A life for a life, he says. Without sacrifice, nothing good can grow. Without death, there can be no rebirth. In exchange for her sister’s freedom, Liesl offers her hand in marriage to the Goblin King. He accepts.

Down in the Underground, Liesl discovers that the Goblin King still inspires her—musically, physically, emotionally. Yet even as her talent blossoms, Liesl’s life is slowly fading away, the price she paid for becoming the Goblin King’s bride. As the two of them grow closer, they must learn just what it is they are each willing to sacrifice: her life, her music, or the end of the world.

I really wanted to love this one.  I saw that blurb and like many others, I immediately thought of the movie Labyrinth.

I am pretty sure I came into this book thinking I was going to read a novel version of Labyrinth.  It wasn’t Labyrinth.  Not that this makes it a bad book but I think this is why I didn’t love it as much as I had anticipated.  I basically had a different book in mind when I started.  It’s like when you are expecting to eat a chocolate chip cookie and it turns out to be raisins.   I enjoy oatmeal raisin cookies (love them!) but not when I am expecting chocolate.

I am not sure what made me dislike this book overall but I just struggled to stay in that world.  I really did like this book in tiny spurts, but after a while, it felt like a chore and I had to put it down.  The main character was a little whiny and I felt that the story moved so slow.   There were little sections that really grabbed my attention but they were few and far between.

This odd love/hate feel this book gave me is confusing and I don’t know if I will read the next in the series.  Maybe now that I know that it is not like the movie Labyrinth I can come at this book with a different mindset.  I mean look at that cover, I don’t think I will be able to resist. 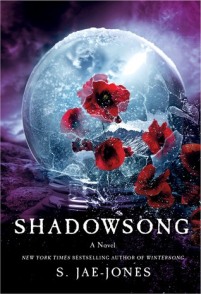