Last week was World Read Aloud Day.  I work in a middle school and never put too much thought into this day besides making the students aware and maybe suggesting they go home and read a story aloud to a family member.  But the past few years we in the library have decided that middle schoolers aren’t read aloud to enough.  We decided to read celebrate this day appropriately, by reading to as many of them as we could, and they loved it!

This day took a lot of planning on our part and required a lot of help from both students and staff.  We needed staff to do one or all of the following:

This is sort of a big deal.  Teachers don’t always want interruptions to their lesson and even fewer are willing to give up their free time.  It is also a kindness to us that they let students leave their class to go read, most teachers don’t like letting students go to the bathroom at the start of a lesson let alone leave for 10-15 minutes to go to another class.

We also needed students who were willing to go into a classroom to read a story in front of an entire classroom.  It’s hard enough asking adults to read in front of 25-30 middle schoolers!  But these students did wonderfully.

The head librarian found some really awesome books for this day.  We borrowed many from the elementary schools in our district and some from our local public library. 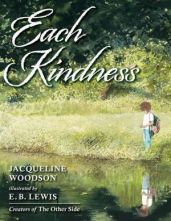 Each Kindness by Jacqueline Woodson

This book was read to our 8th graders.  It is a story told by a young girl named Chloe.  A new girl, Maya, has come to her school but no one is very nice to her.  The students won’t play with her, they make fun of her second-hand clothing, they are simply not kind to her.  One day  Maya is not in school and the teacher gives a lesson about how even small acts of kindness can change the world.  Chloe sees that she has not been kind and vows to do better when Maya comes back to school, but Maya never does.  After a few days, the teacher announces that Maya and her family had to move and Chloe is saddened by her choices and wishes she had just one more chance to show Maya some kindness.

I was amazed at the reaction I got from my 8th graders.  I will admit I really overdid the voices.  When Chloe would say she didn’t want to play with Maya, I said it in my best mean girl voice.  The looks on their faces!  It was like the Reynolds Pamphlet scene from the musical Hamilton.  Everyone was just shocked.  It was wonderful to see how this story made them feel.  It is an important message to be kind to others because you might not have another chance.

The Legend of Rock Paper Scissors by Drew Daywalt

Oh, my goodness, this book is so much fun- laugh out loud funny.  It was fun to read and fun to listen to as well.  This book was read to the P.E. classes and they even played a version of rock paper scissors that involved a lot of jumping.  The kids had so much fun and it was a great way to tie in the book.

Honestly, if you haven’t read this book you need to get your hands on it.  It’s a quick read, stop on by your local library and give it a quick once-over.  You won’t be sorry.  Some of my favorite lines

“Do you have your battle pants on?”

“If by battle pants you mean no pants but I’m still willing to fight you then…yes.”

So goofy.  The kids were rolling on the floor.  But again, you need to really get into the voices.

After the Fall: How Humpty Dumpty Got Back up Again by Dan Santat

This is the story of what happened after Humpty fell.  A story about getting back out there after you have failed.  Spoiler!

At the end, Humpty gets back on the wall and he breaks out of his shell to reveal he is a bird and he flies away.  When I first read this, the sixth-grade class was silent with confusion at the ending.  After a few seconds, one student finally spoke out, “He’s an egg, and he hatched!”, the rest of the class was a chorus of “oh” and “ah” and “Now I get it”.  It was a cute one as well.

Margaret and the Moon by Dean Robbins and Lucy Knisley

A children’s picture book about the woman who is considered the first female software engineer.  This book was picked for a science class that is starting a space unit.  It’s a fun book with a lot of information about Margaret Hamilton and her love for numbers as a young girl and how that love of numbers helped her to code NASA missions.  I liked this one because as I read I was asking if anyone else liked math.  There were a few girls who had their hands up and those same girls and a few others were sitting up a little taller as they learned about Margaret.

One Grain of Rice by Demi

This might be a familiar one to many.  This was for the math classes. It is the story of a girl tricking a raja by asking for only one grain of rice to be doubled each day for thirty days as a reward.  The end result is more than one billion grains of rice!  Many of the students remember hearing this one when they were younger but the concept of exponential functions is now a little easier to discuss.

I should point out that we did not discuss anything with the classes.  We went in, read, then left.  It was up to the teacher what followed.  I said before that the P.E. teacher played a game related to the book and I know that a few of the teachers started a discussion about the book as I was leaving but a few might have just said “Wasn’t that fun?  Ok, back to class.”  And that is fine.

It was a great day!  Lots of running around but worth it, I never left a classroom without a smile on my face.  Every class was excited and it really reminded me just how lucky I am to work in a library.