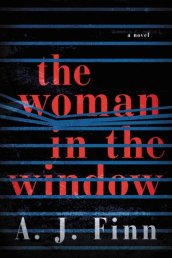 The Woman in the Window by A. J. Finn

Rating: 4 out of 5 Magical Coffee Cups

Anna Fox lives alone—a recluse in her New York City home, unable to venture outside. She spends her day drinking wine (maybe too much), watching old movies, recalling happier times . . . and spying on her neighbors.

Then the Russells move into the house across the way: a father, a mother, their teenage son. The perfect family. But when Anna, gazing out her window one night, sees something she shouldn’t, her world begins to crumble—and its shocking secrets are laid bare.

What is real? What is imagined? Who is in danger? Who is in control? In this diabolically gripping thriller, no one—and nothing—is what it seems.

Enter The Woman in the Window.  Anna is stuck in her house and all she does is play on the computer, watch old movies, drink far too much wine … and spy on the neighbors.

Because I knew a little of the story I figured I knew everything that was going to happen.  Again, I have never read the Woolrich book or seen the Hitchock movie, but I was convinced I was going to know exactly what happens in this book. I don’t know what is wrong with me sometimes. I knew nothing!

I also listened to the audiobook on my drive to and from work, I mentioned this only because there was a big- ish twist in this story that shocked me and I honestly thought that this was the end of the book.  I was pulling into a parking lot, thinking I might just sit in the car to hear the end of the book but when I looked down I saw there was like 3 hours left in the book!  I was thinking to myself “how can there be three hours left!”  Oh, but the story when on- the crazy just kept coming!  I really thought I knew what this book was all about , man, I was way off.

I will be on the lookout for more from this author.